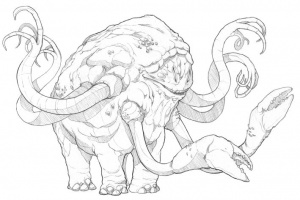 The Vonikin Krel are one of the most universally-loathed races in Starmourn sector. They’re a race of extremely wealthy degenerates who are a form of psychic vampire that get sexually excited by the suffering of their victims.

Physically, they couldn’t be less humanoid. Sitting on four stubby legs, their bulbous, fleshy body has two tentacles coming out of each side, terminating in two or three mini-appendages at the ends, and two more tentacles coming out of the front of its ‘chest’, ending in vicious-looking pincers. Two vertical slits on the front of their bodies serve as eyes, while a wide mouth filled with small, sharp teeth sits underneath it.

The Krel, as they’re sometimes simply referred to, are one of the few powerful species that has shown no interest in moving beyond their home system. The only known colonies they have outside of their home system of Wuntoklan – named after their home planet of the same name – are trading outposts.

Like many spacefaring races, the Vonikin Krel have a long history, much of which is unknown to outsiders, not out of any particular desire to conceal it, but simply because the sheer number of civilizations and races in Starmourn, and the length of time – tens of thousands of years at minimum generally – that they’ve had a civilization dictates that there’s more history available to learn about that any 1,000 historians could master.

What we do know is that they first achieved spaceflight about 39,000 years ago, as one of the first races to do so after the War of Extinction that saw the Ishvana wipe out many of the Elder Races. We also know that sometime in the past 6,000 years they became the masters of shipsim design, which marked the point at which their race came together, abandoned virtually all other enterprises, and grew collectively rich, allowing them to begin to turn their attentions to less respectable pursuits.

Chief among those disreputable hobbies is the torture of sentient beings for their sexual pleasure. For thousands of years, they essentially farmed another race – the Cho-kura – that had evolved alongside them on their planet for their twisted pleasures, but by about 600 B.E. the Cho-kura were, if not quite extinct, then on the verge thereof, victims of the greed of the Krel.

And so the Krel had to find new victims. As they were not a great empire, they weren’t able to themselves go out and conquer lesser species. Instead, they chose to put together a massive media outreach program pitching, unlikely though it seems with the perspective of time, incredible pleasures to be had for those who would visit Wuntoklan. They promised they could stimulate the minds of visitors such that the visitors felt they were experiencing the greatest pleasures of the mind and body possible, and indeed, they are able to do that. However, they don’t enjoy the pleasure of their victims, and so only induced that kind of reaction in enough visitors that they’d then leave Wuntoklan telling tales of the superlative delights to be found there.

They were careful, and harvested only a percentage of visitors, but as with any degenerate, their appetite grew, and eventually, the official line as to why many never returned from Wuntoklan – that they simply stayed, preferring to live in ecstasy forever – began to provoke more than idle suspicion.

The youth among the Der'em, in particular, seemed drawn to this lure placed by the Krel, and as the losses slowly mounted over the centuries, the Der'em, who were a brilliant, but not powerful, species began to agitate amongst other races, insisting that the Vonikin Krel must be stopped, by force.

For a decade, the Vonikin Krel watched, with a level of amusement, the efforts of the Der'em to paint them as the villains they are, for a decade, but as the Decheerans, Amaians, Shen, and Tukkav began to take note, they were less amused, and decided it was time to simply silence the peaceful Der'em, using the mercenary Free Fleet, which ultimately resulted in the disappearance of Earth and the destruction of most of the Human race, as well as the Ishvana's multiple attacks on Starmourn sector since then.