The Amaians are a humanoid species originating in the ocean depths of the planet Delphi, and are one of the member races of the Song Dominion. 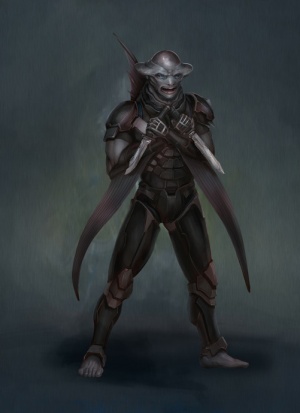 Amaians have various fish-like characteristics and are well adapted for an amphibious lifestyle. Both males and females exhibit smooth and hairless, scale-like skin, long fins growing from their limbs and back, and gill slits at the base of the skull. However the gills they sport are vestigial; the Amaians have evolved working lungs among their other more terrestrial adaptations such as arms and legs. Their rows of sharp teeth are well suited to their exclusively aquatic diet of flora and fauna. They also exhibit a degree of sexual dimorphism. The males are generally larger and posses great musculature, and their skin is rough and grey. The females are generally smaller and possess a more lithe physique, and more ornate, frilly fins. Mating includes some degree of bonding for the benefit of the offspring, but Amaians tend towards polyamory. The females gestate their offspring for a period of 12 months and give birth to live young. The average lifespan of an Amaian is approximately 110 years. Although they have evolved many terrestrial adaptations and are capable of survival in such environments, they are best suited for amphibious living and are imprinted with a strong affinity for water.

The Amaian race evolved from fish-like aquatic creatures within the vast oceans of Delphi. As they progressed into a sentient and amphibious race, they developed a significant civilization with religion, art, government, and naval technology. However, their emergence from the oceans put them at odds with the other sentient race upon Delphi, the Evux. The Evux were a terrestrial race who wrestled with the Amaians for domination of the planet. In the end, the Amaians were victorious and the Evux were completely exterminated. Approximately, 39,000 years ago, they developed the capability to traverse the ocean of stars by creating spacecraft. Since then, they have had contact with many other races from across the Starmourn Sector, including those of the Free Fleet whom they are known to do business with.

The Cabal Tower - the seat of Amaian government.

The culture of the Amaian race is proud and complex. In their early development they began reverencing a god known as K'si. K'si embodies the notion of the ocean depths from which they were spawned and to whence they return in death. This reverence deeply impacts the Amaians and is the cause of their cultural preoccupation with the oceans of their homeworld. They rarely travel far from any source of water and all major settlements are established on one. It is imperative that all members of their race begin and end their lives in the ocean waters of Delphi, so much so that all Amaian spacecraft carry supplies of it to ensure its availability even in the vast reaches of space. When death approaches, Amaians take part in perhaps their most sacred ritual, the Last Inundation. The elderly or infirm are expected to travel back to the Delphin Oceans and after an ornate ceremony return to the ocean depths never to return. Despite the implications of euthanasia, this is considered the right and honorable way to die for any Amaian and further removes the burden of caring for the sick and elderly from their society in general.

The Amaians are ruled by a dynastic cabal who wields absolute rule and enforces it ruthlessly from their tower in Atilan. The cabal is comprised of the most powerful and influential families in Amaian society and are represented by either a matriarch or patriarch. Family influence determines social status and leads complex political maneuvering. However, the Amaian military follows its own set of rules. Although dispatched and commanded by the Cabal, station within the military is based solely on merit and those who perform rise quickly in the ranks.

The Amaians are rather haughty and contentious to outsiders, reflecting their strict and refined societal standards. They do not heavily value individualism rather prioritizing the well being of the race. They promote art and culture, particularly enjoying a unique form of theater called trishows where three simultaneous stories are told at once. Their main source of wealth comes from their peerless shipyard, Tetryon Yard