The Ry'nari are a reptilian race native to the planet Hororeon, and are a member of the Song Dominion.

The Ry'nari are instantly recognizable by their scaly skin, long, powerful tails, and razor sharp teeth. They possess three digits and one thumb on each appendage. Females are superficially similar to males but possess feathered crests. Ry'nari typically mate for life; the females giving live birth to a single child after an eleven month gestation period. The newborns have a very low survival rate within the first two years of their lives, although those that survive live an average of one hundred years. They are omnivorous, but their formidable teeth lends meat to being their favorite meal. Their hearing is different than that of any other race in the Starmourn Sector, and are unable to hear tones. 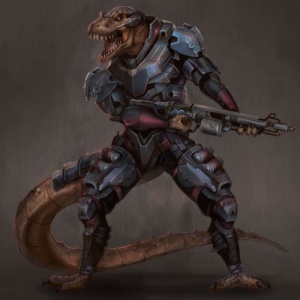 The Ry'nari have warred against their ancient rivals, the W'hoorn for ages with no final victor emerging to this day. However, the Ry'nari won their first major victory against the W'hoorn under the leadership of the first Mogul, Harec Gankeot.

The Ry'nari culture is highly tribalistic and composed of many large alliances. Families come together with their extended kin to form Tribes, which in turn forge alliances with other tribes to form Hordes. The strength of these alliances determines political power amongst the Ry'nari. Horde leaders serve for life, but when one passes away extravagant feasts known as Narangerel are held to celebrate the fallen leader and ultimately select a new one. The new leader is selected by a process known as a Gomoran, where each contending leader is represented by six warriors in a fight to the death. Typically, the leaders of the individual hordes come together to lead the race as the Council of the Hordes, seated in the Citadel of Hordes within the capital city of Ostari, but on occasion, a particularly powerful leader will unite all the hordes under his control as a mogul. Family strength and loyalty is highly regarded in Ry'nari culture, and those couples who are unable to successfully rear children are looked down upon.

Ry'nari have unique hearing that differs from any other race in the Starmourn Sector. They cannot comprehend musical tones and thus prefer a type of atonal chanting known as kave whose words have no concrete meaning but are meant to build a series of suggestions in the mind of the listener. This abstract inclination carries over to their physical forms of art, the Ry'nari are renown for their abstract sculptures. They often believe these sculptures, as well as other inanimate object, have spirits and personalities and often treat them as personal beings, whether protecting it in love or smashing it in anger.

Ry'nari tend never to say the words 'I'm sorry' or apologize, instead relying on a shared tribal culture to ensure a sense of common morality among themselves. Instead of saying "I'm sorry" a Ry'nari will say "this is right" or "this is incorrect". This can lead to trouble when interacting with other races!

When Ry'nari welcome guests they slaughter something fresh. The slaughter is what counts and that it be fresh, not the something being slaughtered. The freshness of the kill corresponds to the respect they have for their guest. The ultimate honor is killing it when the guest arrives, but if it is still being butchered when the guest arrives, it is regarded as complimentary. Being presented with an old kill is insulting. 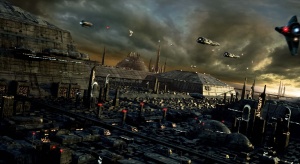 Their main source of wealth is the production of quantum power cells, which power virtually everything in the galaxy, and large architectural firms that specialize in creating orbital structures such as ship forges and colonies.