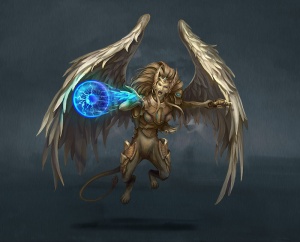 The W'hoorn are a winged, feline race originating from the planet Benu Wen in the Benu system. They are a heavily militarized society, with compulsory military schools from the age of ten, followed by enforced conscription on their home planet for two years between the ages of eighteen and twenty. They have a proclivity for star kith and the W'hoorn military is well known for its legions of fury warriors, although those who take up or show an affinity for void kith are also highly valued, as is anyone who can be useful in war, basically. They tend to be fiery and highly emotional by nature, (leading to many cultural stereotypes and jokes), but are a strong and intelligent race. W’hoorn have a racial tendency toward claustrophobia, leading to touchy, ill-temperedness when subjected to enclosed spaces for an extended period.

The W’hoorn are a sapient, bipedal, winged race covered in fur with manes of long hair surrounding their heads. Their wings are covered in long plumes, allowing them to glide short distances. They possess three fingers and one thumb on each hand with sharpened claws made for grasping. Their legs are digitigrade, ending in sharp claws as well. W'hoorn have a distinctly lion-like facial structure and muscular physique. They typically do not mate for life, although some do. They experience live birth after a gestation period of around 10 months, typically in litters of 3-6 at a time. Their mating rituals consist of aggressively outmaneuvering one’s mate and forcing them into submission. This stance can change between rituals, and submission carries no lasting stigma. They are mammals, with 4-6 nipples and a navel. The males have penile spines, but otherwise all genders are fairly similar to humans in their basic physiology.

W'hoorn cubs, or 'kits' are born blind and almost hairless, with soft claws, no teeth, only a silky covering of fine fur and no feathers. They open their eyes at around one week, and at first their eyes are usually blue-grey and very short-sighted, only able to see their mother or anyone else who is allowed to get that close at that stage.

They begin to grow teeth and feathers at around three months, the pinfeathers causing just as much pain, if not more, than the growing teeth. For this reason, baby W'hoorn are known to be some of the loudest and most difficult to cope with of all the sector's races. It is said to be one of the reasons they grow to be so resilient and have a high pain threshold, despite being naturally soft compared with many other scaled or armored races. There are many remedies for this pain, ranging from a whiskey-soaked rag applied to the wings and chewed on, lumi dew, aromatherapy, various warm milk concoctions including golden milk tea and hot thornberry juice, to physical tricks like swaddling, repeated gliding and... well... anything that may keep their sleep-deprived guardians from entirely losing it.

Although they technically reach sexual maturity by the age of around seventeen, W'hoorns do not reach their full emotional and physical maturity until a lot later, calling into question the ethics of compulsory conscription from eighteen. Traditional views, however, say that this is a purposeful choice as these experiences should always happen before full adulthood, so as to form the character of the individual. The age of full adulthood in a W'hoorn is thirty, with their 'teenage' or 'young adult' years spanning from their induction into the army until they reach this age. Many W'hoorn have a 'Tricenaria', which is a special birthday celebration (much like a 21st or 18th for humans) to honor this coming-of-age milestone and many jobs in Benu Wen are only open to individuals aged thirty and over.

The W'hoorn place a great deal of store in maintaining their version of honor, specifically as respects conflict, whether in sport or war.

They have a strong dislike of small enclosed spaces, especially those underground. They can tolerate it - after all, they travel on starships like any civilized race - but doing so tends to cause them to be fairly touchy and ill-tempered. As a result, other races sometimes prefer not to serve on board long starship voyages with too many W'hoorn.

Many W'hoorn, despite having a proclivity to starkith, are afraid of fire. They also often dislike water, due to the feeling of having wet fur.

It is a cultural stereotype that W'hoorn love seafood, and one that is quite often true, with Benu Wen being the largest non-amphibious importer of seafood from Delphi, Otra IV and other fishing havens in the sector.

They achieved spaceflight about 23,000 years ago.

Like many, they hate and fear the Ishvana, but their conflicts with the Ry'nari go back much further than that.

The W'hoorn count some of the greatest manufacturers of weapons systems and personal shielding among their races' accomplishments.

Historically, they worshipped a pantheon of W'hoorn Gods, but barring a few cults, they're no longer believed to be real. Their Gods included Sorass, God of the Hunt, Aes'ti, the Goddess of the Skies, Credador, the God of the Wind, and Aes'tun, sister of Aes'ti, and Goddess of War.

They like to build vertically, with lots of open balconies and flat roofs to glide between.

Like many races in the common era, they have become enemies with the Ishvana during the Second War of the Ishvana. The W'hoorn are the ancient enemies of the Ry'nari and have been in countless conflicts with them for more than a millennium. The W'hoorn always held the upper hand until Harec Gankeot was able to unite the hordes as the first mogul.

W’hoorn culture revolves around aggression, and as such, W’hoorn have an aptitude for combat as well as a love for competitive contact sports. Progression in societal structure is allowed through The Right to Challenge. W’hoorn within a certain level of societal prestige may challenge one another in unarmed combat to the death. The repercussions of the challenging W’hoorn losing include bringing shame to the challenging W’hoorn’s name and shame upon his or her family.

Their government is run by military rule. The head of the military, called the Navarach, is the de facto head of the W’hoorn government