Native to the planet Frixion VI, the Nusriza are a social, uninhibited people. Physically they are humanoid, with avian and reptilian characteristics.

Adult Nusriza tend to mate for life, with the female laying a one to two eggs at a time. The offspring hatch after approximately 120 days and are both morphologically and physiologically distinct from their adult forms. The juveniles resemble four-legged, flying lizards and grow in size for about 15 Galactic years. At this point they reach adolescence and become highly sexually active, aggressively mating with other juveniles in a period known as the Quickening. This enthusiastic mating does not fertilize the females, but wearies the juveniles into a extremely nutrient deprived state. This state causes them to desire the meat of a creature called the algerion. The unique enzymes in this creature's meat causes a physiological change that matures the Nusriza into its adult form, strengthening their rear legs for walking upright, causing their forelimbs to becomes more dexterous, and causing their wings to shrivel and fall away leaving them flightless. Some juveniles are not receptive to the algerion's enzymes and are stuck in a perpetual state of sexual frenzy, often dying of exhaustion and starvation. However, healthy Nusriza enjoy a particularly long lifespan among the Younger Races of approximately 160 years. Adults are mainly insectivores, enjoying a variety of insects prepared in a myriad of ways. 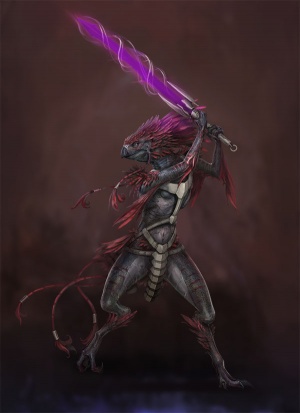 By 31 AE, many Nusriza had become disenchanted with the Echanine religion that ruled their race causing the Echanine Schism. By 35 AE, the dissenters became the dominant force in Nusrizan culture allowing it to practice kith and join with several other races to form the Song Dominion, both which had been previously prohibited by Echanism.

Nusriza live communally in collections of unrelated families called Throngs. They usually share their unique buildings that rise above the clouds, designed with entrances for the winged young to come and go. When an individual reaches age 17 after the period the quickening, they are initiated into Nusrizan culture through a ritual known as the Seventeen Mirrors, a two day event in which seventeen individuals honestly critique the individual on the first day and extol his or her virtues on the next. 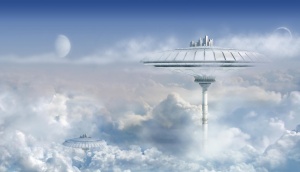 A high rise home shared by a Throng

Their native language, Nusrizan, is perhaps the most complex vocal language in the Starmourn Sector. It possesses not only fourteen unique tones, but involves subtle hand motions to produces various inflections. Their range makes Nusriza excellent singers, and competitions are one of their most favored forms of entertainment. They were able to attain spaceflight only 24,000 years ago and are experts in sensor technology.

The Nusriza are ruled by a dynastic monarchy ruled by a Tajhan that has changed lineages on occasion throughout their history. However for a long time, the true power on Frixion VI lied with the religious establishment of Echanism which worshiped a warrior god called Echanine. This religion held the race back in many ways, prohibiting fraternization with other races impeding trade and cultural advance, and banning the use of heretical kith powers. When the people became disenchanted with Echanism and the Schism relegated the religious to the minority, their culture began to grow once more. They allied themselves with several other races to form the powerful Song Dominion and began to practice both star kith and void kith.

The Nusriza originated their own form of Shi Dhuk by blending together some similar-ish ancient traditions of their own with Shen Shi Dhuk, resulting in the Tajhan Tradition.