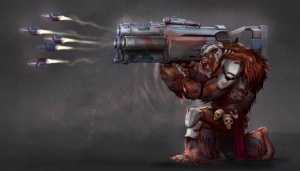 The Tukkav are a physically imposing humanoid race with distinctive primate-like characteristics. They are almost completely covered in thick hair with the exception of their face, hands, and feet. Due to this, they prefer cooler climates. Tukkav mate for life, tending not to find another partner after their mate's death. Females reproduce via live birth after a 11 month gestation period, usually producing one offspring at a time. They are omnivores, suiting their race nomadic traditions.

The Tukkav achieved space flight approximately 16,000 years ago. A civil war was fought amongst the Tukkav over access to their homeworld, Uycheon III. The Home War, as it became known, exiled Tukkav not living on the homeworld permanently in order to deal with the planet's overpopulation. The Tukkav have been at war with the the Loroi on and off for the last 1,700 years. 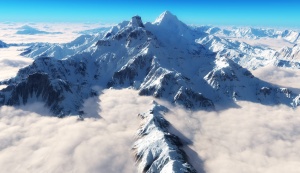 The frigid planet of Uycheon III.

The Tukkav culture evolved from various independent, nomadic groups, and still retains many of these aspects today. The most significant being that there is no centralized Tukkav government. Tribes still remain notoriously independent, maintaining their own individual subcultures including unique economies, spacefaring, and military infrastructures. They only come together during special gatherings held every decade called the Ouran or in times of war to appoint a common Warleader.

The Ouran is a time-honored tradition amongst the Tukkav, where each tribe sends representatives to discuss matters of culture, negotiate and settle debts and disputes, and celebrate in general. In particularly, they enjoy partaking a particularly bitter alcoholic beverage called lapteth beer derived from a native grain of the same name. Likewise, while imbibing their favorite beverages, they play in toof circles, a horn-like instrument.

The Tukkav are known for their mining operations on planets that are typically too cold for most races to safely operate. Although the Tukkav once had many colonies and off-world operations, overpopulation saw all individuals living off-world forsaken in the Home War. Those off-worlders became known as the Exiles and less kindly as the "Rejected" or "Crinkers".

They are avid hunters, having caused many of the native wildlife on Uycheon III to go extinct despite their animistic religious traditions causing them to revere and thoroughly use that which they slay. Due to the slim pickings on their homeworld, hunting trips on exotic worlds are a favorite vacation for Tukkav.

Once every quarter century, the Tukkav celebrate a holiday called Winterflame (or Winterhearth). The holiday was started by a Tukkav by the name of Laus Koldain, and is focused around togetherness, a way for Tukkav in all corners of the galaxy to extend their natural feelings of hospitality and warmth to non-Tukkav.