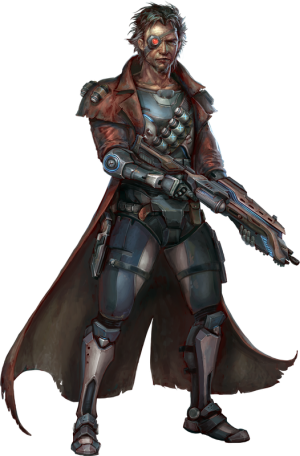 Captain Maddox Khan was a former Human inmate upon the penal colony Callisto who became the leader of the Free Fleet's Omega Company, then co-commander of the entire Fleet, and finally the founder of Scatterhome.

Maddox, along with Akari Lane and Selma Castillo, was instrumental in the insurrection that happened at Callisto and lead his fellow inmates in overthrowing the guards and taking control of the colony before the Free Fleet arrived shortly thereafter. Even in the face of an unknown alien force, Maddox garnered the respect and support of his fellow inmates through his fearless resolve.

While waiting to be sold by the Free Fleet as livestock, the Vendal attacked the ship holding the inmates. Once again, Maddox lead the Humans through the ordeal by sheer force of will causing the Free Fleet to recognize the potential of the Humans for military use.

In the coming years, he and the rest of his fellow former inmates were given intense training. Many not only failed the training but lost their lives in the process, but those who endured were now lead by Captain Maddox Khan as the Omega Company, one of the most feared divisions of the Free Fleet.

In 30 A.E. Commander Mezer Juul's flagship was destroyed in battle by the Bushraki during the Bushraki War. Maddox and Akari Lane took over as co-Commanders of the Free Fleet, which was especially notable as Humans were a very small minority in the Fleet.

In 35 A.E. Maddox and Akari defeated the Bushraki and Vendal with the help of the newly-formed Song Dominion thus ending the Bushraki War.

By 50 A.E. Maddox and Akari were aging, and retired. Their 36 year old daughter, Tamiko Lane Khan took over as Commander of the Free Fleet.

In 76 A.E. Maddox and Akari came out of retirement and defected with a substantial portion of the Free Fleet to the Celestine Ascendancy, to offer them assistance in defeating their power-mad daughter Tamiko.

In 81 A.E. Tamiko had her mother Akari assassinated by introducing a fatal toxin into the mix of chemicals injected into Akari during a planetside rejuv treatment.

Enraged, Maddox threw caution to the wind and eventually crushed his daughter's forces. Tamiko was captured and brought to the Celestine Ascendancy for trial.

Maddox declared that he would not stand in the way of whatever justice was decided for his daughter, that he would not permit the Celestine Ascendancy and the Song Dominion to resume their war against each other, and that he'd had enough of this 'government bullshit' and that these governments were just as bad as the ones back on Earth that had stuck him mining frozen hydrogen on some god-forsaken moon in the middle of nowhere. He was going to leave, and he was taking his Free Fleet with him.

Tamiko was executed via firing squad at dawn the next day. Those who knew him well say they watched Maddox turn into an old man as his daughter's lifeless body tumbled to the ground.

For nine years, the Maddox and the Free Fleet searched for somewhere suitable to live. Ideally, they wished to find a system with at least one broadly-habitable planet that was unoccupied, but none they found met their requirements, and eventually, with resources running low, they agreed to establish a permanent civilization in an asteroid field. These asteroids were found to be rich with raw materials, that they could trade for other supplies, and as a bonus many of the asteroids were nothing but huge chunks of water ice, which could be broken down into its component atoms for oxygen and fuel, or melted to supply the burgeoning civilization with water. Effectively, they had found a source of recoverable water larger than anything a planet could provide.

There, Maddox declared, they would construct Scatterhome.

In 93 A.E. Maddox, arguably the most important Human in the history of that race, died. He and his wife Akari Lane had essentially saved the Human race.

They will never be forgotten.