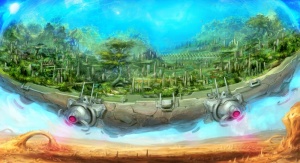 Song City is the capital of the Song Dominion, on the planet Song. It's a huge, craggy, green, self-sustaining island in the sky, constructed that way over 800 years ago in order to distance it from the radiation-laden ground. It's covered in huge, shining metallic spires and is lush with plant life of all kinds, in distinct contrast to the world below.

In the city, there is a heavy use of 'green tech' like advanced hydroponics, water purification, etc. The island is continually regenerated with nanotechnology using garbage and biowaste that has been converted at the atomic level into the Decheeran material known as sunloft. The Decheeran developed this landmass generation technology using their knowledge of solar energy and nanotech. It is strong, porous, and scientifically lighter than air, resembling dark green cork. It's biodegradable when exposed to water, which is great for food production, though it requires constant upkeep and an influx of raw biomatter to replenish the substance of the island.

Many of the residential buildings in the city are crafted primarily from wood, another influence of the Decheerans. Massive hovertech engines (developed by the Amaians and the Ry'nari) keep the city in the air and stable, while force fields, controlled electrostatic discharge, and atmospheric manipulators keep the air clean and the wind quiet. Tech is in use everywhere, but wealthier residents prize discrete tech that doesn't make itself glaringly obvious.

Despite the serene, minimalist facade of the city, its inhabitants are painfully aware of what caused the wasteland below, which even eight centuries later remains mostly uninhabitable. As such, the Song Dominion is capable of fielding a ruthless military force when it needs to, and it has large clusters of military satellites in orbit around the planet, placed there to house their combined army and protect the capital from any incursions. Great gun emplacements are concealed beneath the spongy mass of the city itself, which could turn the whole thing into an island-sized, laser-shooting battleship in the sky.

These cultivated acres of trees, greenery and floral art conceal an eerie memorial to the destroyed planet below - namely, the remnants of neural replicators salvaged from the casualties of the First War of the Ishvana. Unable to be repaired and replaced in clone bodies, the corrupted neural records were instead placed in ambulatory holographic projectors that wander the gardens. These projections are all that remains of the former residents of Song's surface. The resulting effect is ghostly, with the Gardens populated by translucent simulacra whose behaviors are often strange. There have been multiple debates about the ethics of such an act, with arguments about whether or not the simulacra are truly conscious, but most residents of the city prefer to preserve them. Despite its beauty, the Memory Gardens are a strange place, avoided by tourists and pleasure seekers.

When your flying city stays in the air by the grace of science and engineering, it stands to reason that scientists and engineers have great influence over the city's architectural choices. The Flying Market began as a rivalry between two of the city's most brilliant industrial engineers, and continued on as a competitive tradition in a place that seems to possess a higher-than-average spirit of oneupsmanship. Over many years, Song's plaza of trade came to be located on a mazelike network of walkways and hovering platforms that soar above the main structures of Song City. Accessible by lifts, hovering staircases, anti-gravity devices, and teleporters, the Market is an often confusing tangle of shops and entertainment that the city's engineering team has complete control over, and which often changes based on the byzantine whims of insomniac inventors. The only rules are that nobody can be hurt and that commerce can continue unabated. These loose guidelines have led to a vertiginous experience for the average shopper.

A broad and shallow reservoir from which giant "trees" grow. Mirror Lake is both a high-tech water purification plant, an agricultural necessity (rice paddies) and a neighborhood of Song City. Its primary inhabitants are Amaians and Decheerans, who enjoy complementary interests in things such as water and sunlight.

This neighborhood is where many Ry'nari and Nusriza live. It consists of the typical large residential buildings for the Ry'nari (with a naturalistic Song flair), surrounding an immense and celebrated sculpture garden. Rising above these are lofty spires of Nusriza dwellings. The Broken Tale Cantina is a popular meeting spot in the neighborhood.

A lower "deck" of Song City, engineering is a broad and expansive area holding hover engines as big as small towns.

This immense manufacturing endeavor turns the waste generated by the residents of the flying city into both power for the hover engines and more Sunloft for the city's base. Though the name is simple, "Recycling" is anything but. It is located on the lower outskirts of Song City and is as large as a small village, filled with power generators, waste processing, and massive Sunloft labs. Many of the poorer citizens of Song live here, and are directly involved in one of the city's dirtiest occupations.

This small station is a rad-shielded bunker near an ancient station called Canticle Starport in the blasted ruins of a forgotten city on the surface of the planet Song. A science facility, it is responsible for experiments conducted on the surface of the planet. Example tests include habitability in hostile environments, the capture and study of irradiated lifeforms, and subterranean farming.