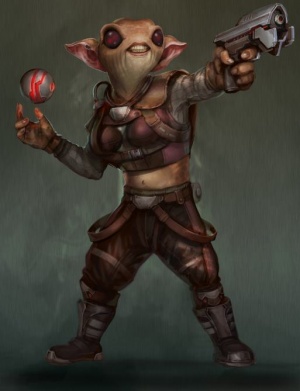 The Elgan are a diminutive humanoid race characterized by their broad, fleshy ears and large, inky eyes. They are largely smooth and hairless, with the exception of males who are able to grow limited facial hair. Monogamous in their mating, they reproduce via live birth after a gestation period of about 8 months, and have been known to live approximately 80 years.

The Elgan achieved spaceflight approximately, 22,000 years ago. 125 years ago, some Elgan formed the Elgan Underground, a "criminal organization" designed to thwart the Nabia's drug peddling endeavors without inciting open warfare.

The Elgan are socialist and highly family-oriented, living with their large extended families within communal homes called tohs. Their family units are highly interdependent, with widowed Elgan often marrying their deceased spouse's closest kin, ensuring that everyone is always looked after. Moreover, this mentality is rooted in the belief that all of their deceased relatives are, in fact, gods which continue to exist along side their living kin.

Elgan are fixated on wealth creation and are well known traders and entrepreneurs throughout the Starmourn Sector. They favour any technological amenity and are particularly fascinated by that of the extinct Elder Race of the Vyar. In their own right, they are well known for their handheld weaponry, blasters in particular. Although they are highly motivated to amass wealth, they are a most generous people. In fact, Elgan do not leave most of their estate to their next of kin, but rather the governing Elgan Collective, lead by the Trinity, which ensures that the funds are directed to those in need. They treat the sick, elderly, and disabled very well and it has been said, "No one goes to sleep hungry on Krell.

Their appearance belies their mischievous natures. Elgan are generally outgoing and jovial and enjoy gambling, dancing, and playing practical jokes. However, as amiable as they are, they are easily offended by personal or racial disparagement and are apt to draw one of their famous blasters if they feel insulted. One notable ritual of the Elgan is the Binding Dance, where while bound to silks, newlyweds dance about each other in an intricate pattern which symbolically binds them together. 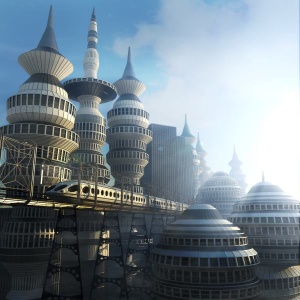 The Elgan capital of Biloxan