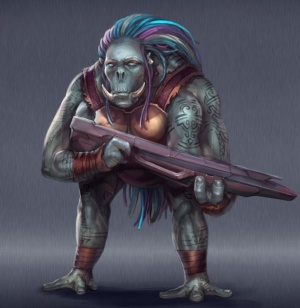 The Krona are a brawny people that are more muscular than most races thanks to the higher-than-average gravity of their home planet of Gunurash III. They have squat, sturdy bodies, whose hand-like feet are attached to their bodies via legs that join the torso just below and forward of where their two arms do. They have a very thick, durable hide that comes in a variety of shades of blues, greys, and greens, and both genders grow sharp tusks out of their jaws. The Krona female gives birth to live children, who are capable of walking and feeding themselves within weeks after they are born. The gestation period is two years. Krona are tough, and can live for over 500 years, though thanks to their violent culture, most of them don’t last that long. An old Krona is a revered Krona.

​The Krona are one of Starmourn's younger races in terms of the age of their civilization, having only reached out into space around 15,000 B.E.

The meat of insects is a staple of the Krona diet, as the insectoid life on their rocky and inhospitable homeworld grows to unsettlingly large sizes. They can obtain nourishment from vegetables, but these don't grow well on their home planet, so don't tend to feature in any of their native cuisine. A favorite snack of the spacefaring Krona is salted, freeze-dried broks, which are a small insect native to their home planet that's near the bottom of the food chain.

The Krona love to feel like they're larger than life. They want to be legendary, famous or infamous, and remembered. As a result they're well-suited to high-risk, high-reward professions like mercenary and bounty hunter. They're not, however, particularly good at following orders. They are often outlandish in their dress and behavior, and they like attention. They think nothing of hogging the spotlight or making a situation all about themselves.

They dislike damp climates, as their home planet is arid, rocky, and tough. They like tattoos, piercings, unnatural hairdos, and metal jewelry. They also approve of precise record-keeping, in the service of documenting their exploits, deeds, and history.

Fond of sex and physical contact, but of an untrusting (and untrustworthy) nature, it is rare to see a Krona in a long-term relationship. They’ll hop from bed to bed without sticking around to make friends. Any tightly knit relationship that occurs usually happens because both parties have a great deal of respect for the other’s power or fame.

Krona families are not tight knit, with their young able to see to their own needs shortly after birth. Single mothers are common. There is a brief period of time (about a month) between birth and self-sufficiency when a young Krona is doted on by its mother – but after this, the child is largely left to its own devices. Unsurprisingly, the mortality rate of very young Krona is quite high as a result.

Death is swift on Gunurash, and Krona accept it as part of life. However, like most sentient races, they mourn the loss of one of their own, seeing it as a waste of potential, value, and strength (especially if it is a younger member of society, who might have lived for centuries more). When a Krona dies, his peers will take his body back to Gunurash III for disposal. The rocky ground of Gunurash makes burying the corpse within the earth impractical, and the scarcity of trees make pyres expensive, so there are few graveyards or tombs on the planet. Instead, the Krona's peers feed his body to the giant insects that roam the wastelands, and spend an entire night reciting the departed's greatest deeds. If the body is not recoverable, an offering of meat will be made to the local wildlife instead.

Loud music, feats of strength (such as a violent sport), or feats of daring (such as skyblading) are entertaining to the Krona. They also greatly enjoy sampling the cuisine of other cultures, as it tends to have much more variety than what they're used to. Cooking shows are very big on Gunurash III.

While the unstructured culture of the Krona isn’t very focused on government and laws, they do have a democratic tradition of electing their rulers (who they call the Elders), of which there are always three. Candidates who can command the "Loudest Voice" (the largest amount of Krona) will join this trio, and elections are held every twenty-five years. It is possible for Elders to be elected again and again, as in the case of Nial-Anbu the Endless (one of the oldest Krona living, currently serving his 6th term in office) These Elders make their home in the capital city of Agog, which is populated almost entirely by government employees. The Elders exist in the mind of the public as both bureaucrats and folk heroes and tend to draw large crowds wherever they go, almost like rock stars. If there is a decision on a planetary, system-wide, or galactic level to be made, they will make it, and their decisions will be accepted. Day to day, they tend to let the people do their own thing and only step in if it looks like civilization is about to fall apart.